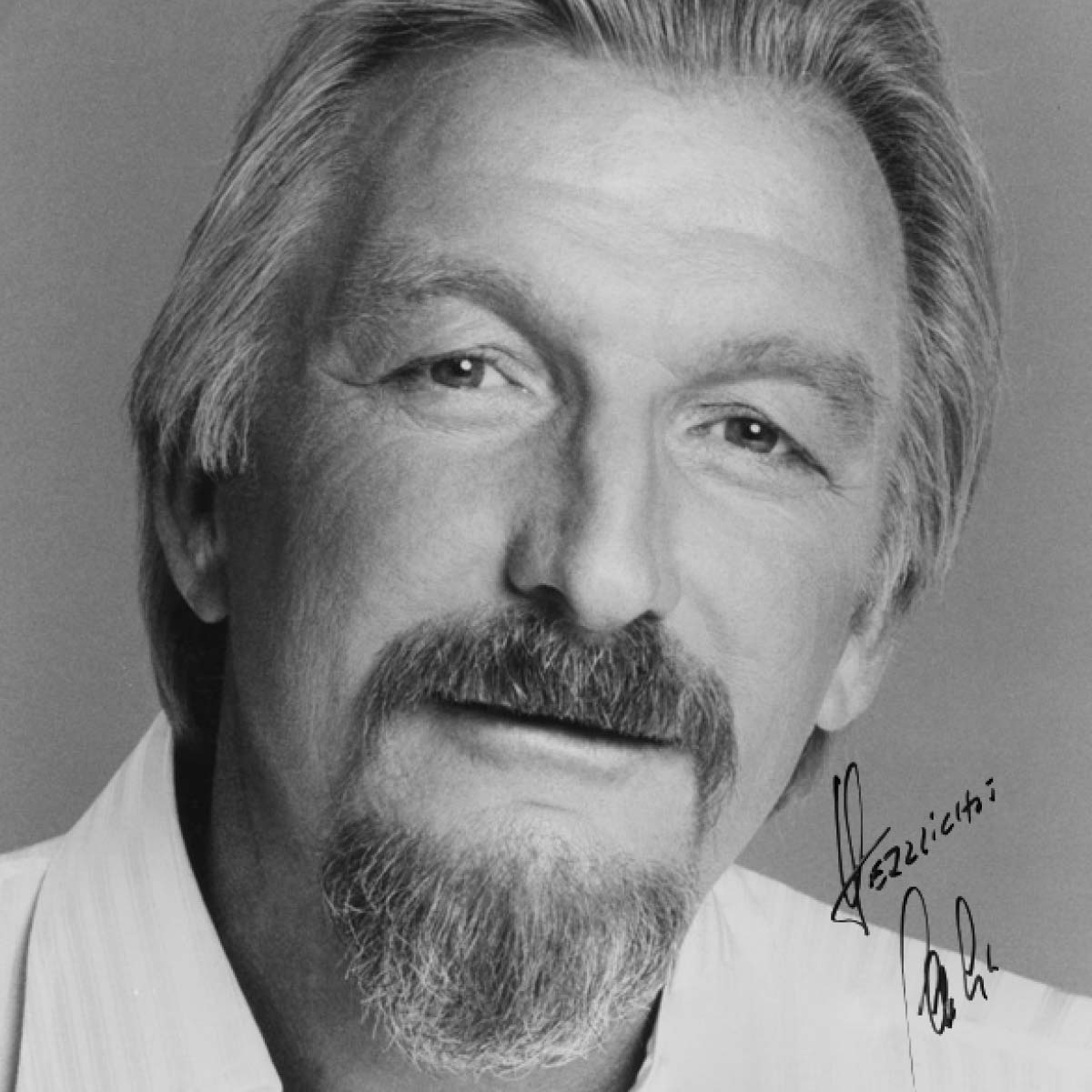 Biography of a Legend

Last received his training as a cadet at the Military Music Schools in Frankfurt am Main and Bückeburg. In 1946, at the age of 17 when he was still called Hans Last, he was asked to join Hans-Guenther Oesterreich’s Radio Bremen Dance Orchestra as a double-bass player, along with his brothers Werner and Robert, and he played in the Last-Becker Ensemble. 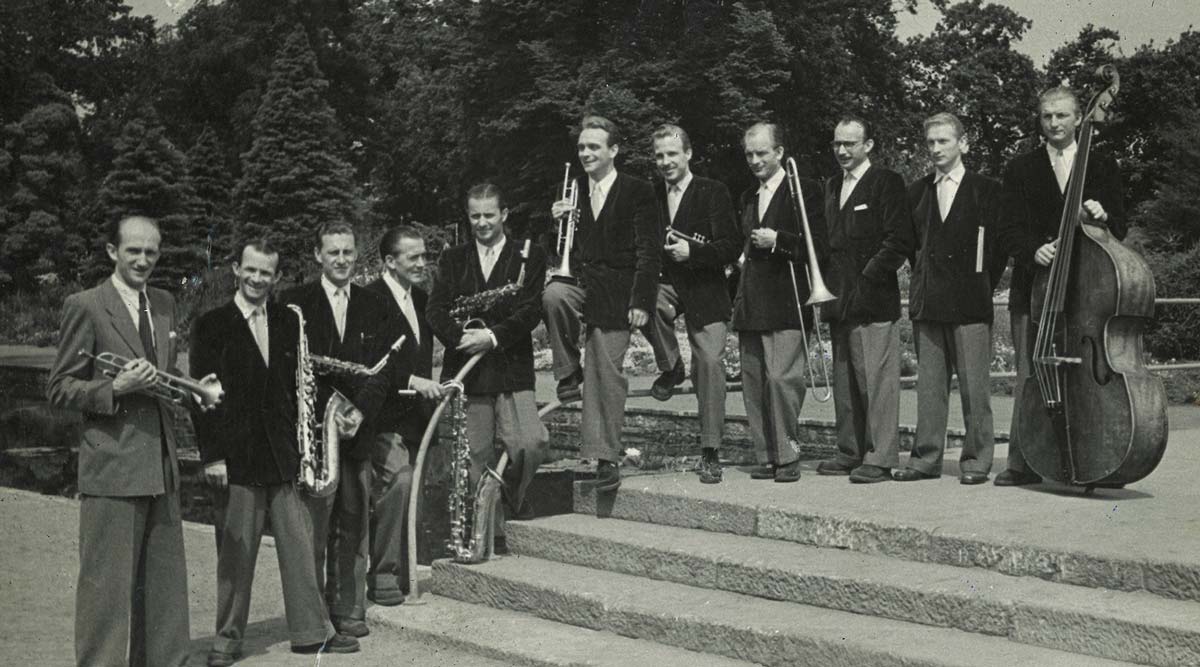 His brother Werner then launched his own career under the pseudonym of Kai Warner, and his brother Robert Last was the first percussionist of the James-Last-Band. In 1955, James Last joined the Radio Orchestra of the Northern German radio station in Hamburg. In the early 1950s, he won several “Jazz Polls” as a jazz double bass player.

In 1964, he was offered his own record deal with Polydor. This was the starting point of his instrumental music recordings with his orchestra James Last & His Orchestra, a big band with strings and choir added.

Some of the music he composes himself and some of it he rearranges.

His repertoire extends from swing to pop, but also includes folk songs and classical music. His 1965 album “Non Stop Dancing” marked the start of a unique career which made him one of the most successful musical artists in the world. 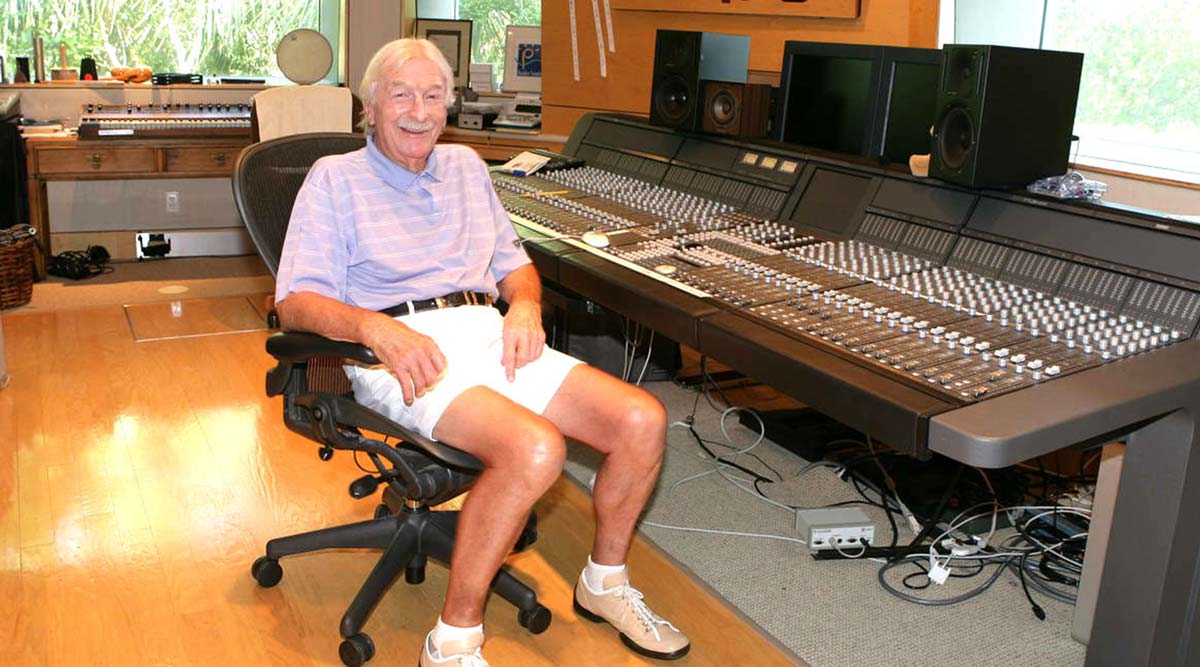 Over the course of his career he has received numerous awards such as the “Country Music Award“, the “Platin Stimmgabel” and “Echo” for his life’s work and even including the Bundesverdienstkreuz am Bande (Order of Merit of the Federal Republic of Germany).

Following the completion of his European tour “James Last – Around the World at 80 Years” on the occasion of his 80th birthday in 2009, Universal Music Entertainment honoured him with a “Lifetime Award” for over 80 million sound recordings sold. 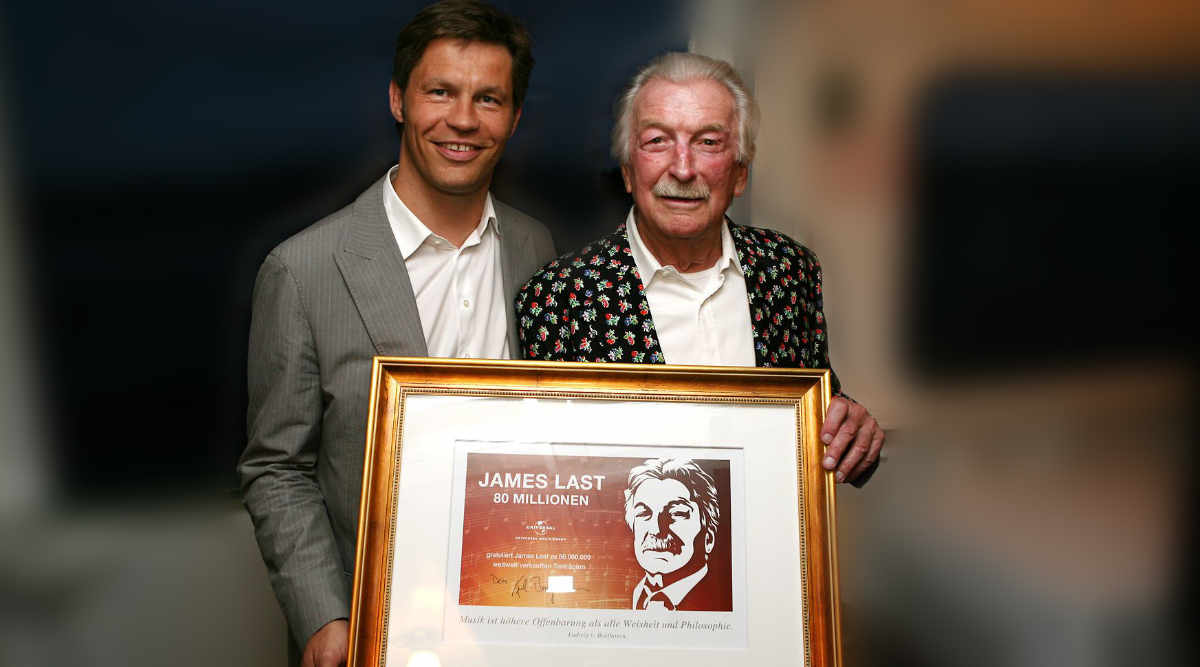 His hometown of Bremen, Germany, awarded him the “Senatsmedaille für Kunst und Wissenschaft” (Senate Medal for Art and Science) in 2009 and appointed him as Honorary Senator by the University of the Arts in Bremen that same year. James Last’s most recent distinctions came on 24 May 2012 when he was presented in Berlin with GEMA’s German Music Author Award in recognition of his life’s work and on 8 April 2013 when he received a Golden Order of Merit for services rendered to the State of Vienna.

Especially in the 1970s James Last was celebrated as the “party king”. He created medleys by tying together brief renditions of popular songs with his characteristic dance beat. This party music had an audience ranging from rock music aficionados to traditional dance music lovers.

He also had many guest performers, among them Wencke Myhre, Freddy Quinn, Richard Clayderman, René Kollo, Helmut Zacharias, Edward Simoni, Fettes Brot and others. For Elvis Presley he composed the song “Fool”, which the King of Rock’n’Roll included on his first RCA record. On the occasion of his 75th birthday, the CD “They call me Hansi” was released in co-operation with RZA, Jan Delay, Herbert Grönemeyer, Tom Jones, Hayley Westenra, Luciano Pavarotti, Xavier Naidoo, Nina Hagen and Till Brönner. 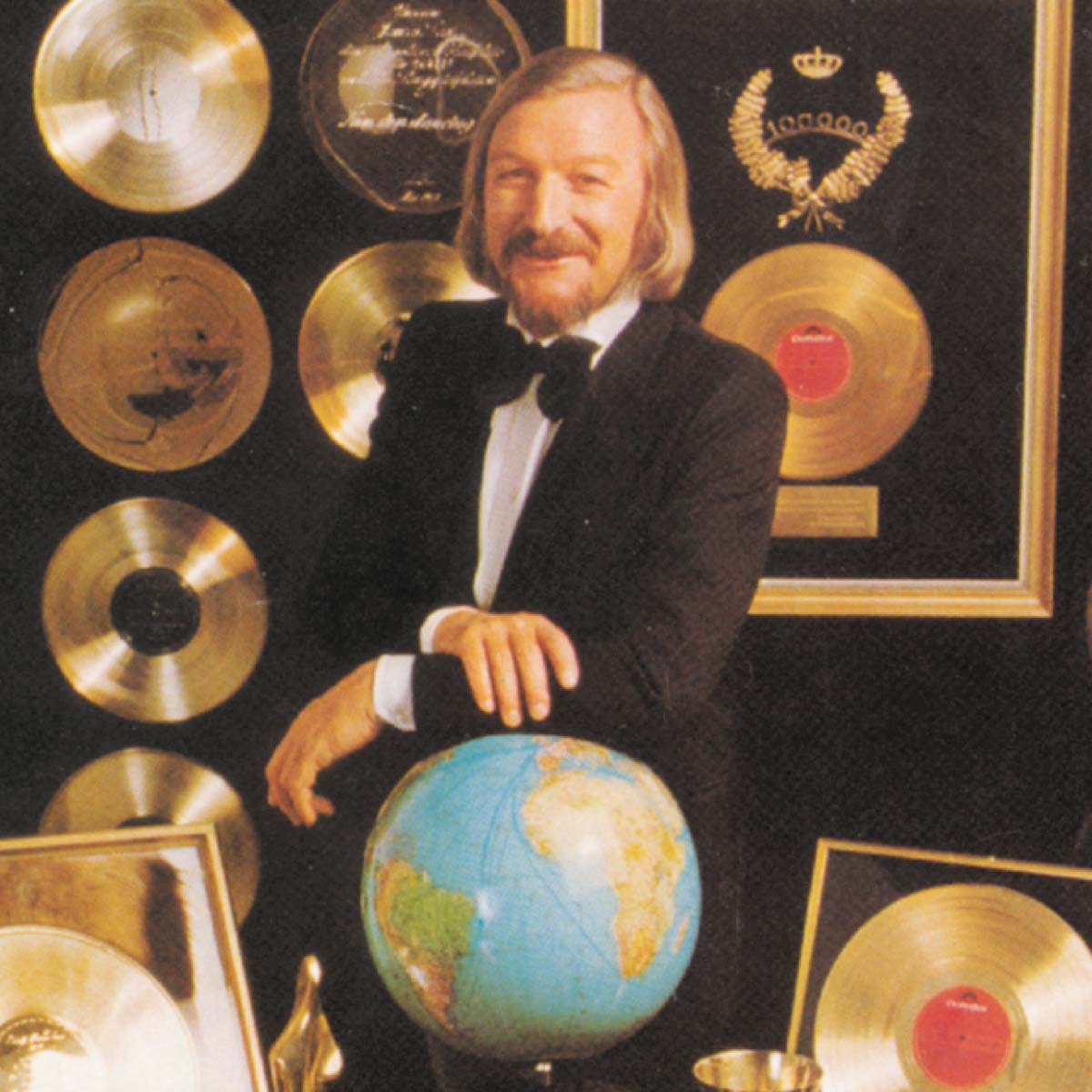 Among his most successful compositions are “Games That Lovers Play” and “Happy Luxemburg”, but also the themes of German television series like “Der Landarzt” (The Country Doctor) or “Das Traumschiff” (The Dream Ship) and of the successful German music chart show “ZDF-Hitparade“ by Dieter Thomas Heck. He also penned the soundtracks for German films like “The Captain” (1971) featuring Heinz Rühman, as well as for “Morning’s at Seven” (1968) and “At the Height of the Moon”, two films based on the successful novels by Eric Malpass. For the series “Star Parade” with Rainer Holbe, broadcast on the second public German TV channel ZDF from 1968 to 1980, he not only composed the theme, but regularly appeared in the shows with his orchestra. His song “The Lonely Shepherd” was performed by the famous pan flute virtuoso Gheorghe Zamfir in 1977 and attained cult status 25 years later when it featured in the soundtrack to Quentin Tarantino’s film “Kill Bill: Vol. 1“.

Waltraud, his wife of 42 years, passed away in 1997. As he himself said, what helped him overcome his grief were his faith, his music and his second wife Christine. Until 2015 James Last and Christine lived together in Florida and Hamburg. 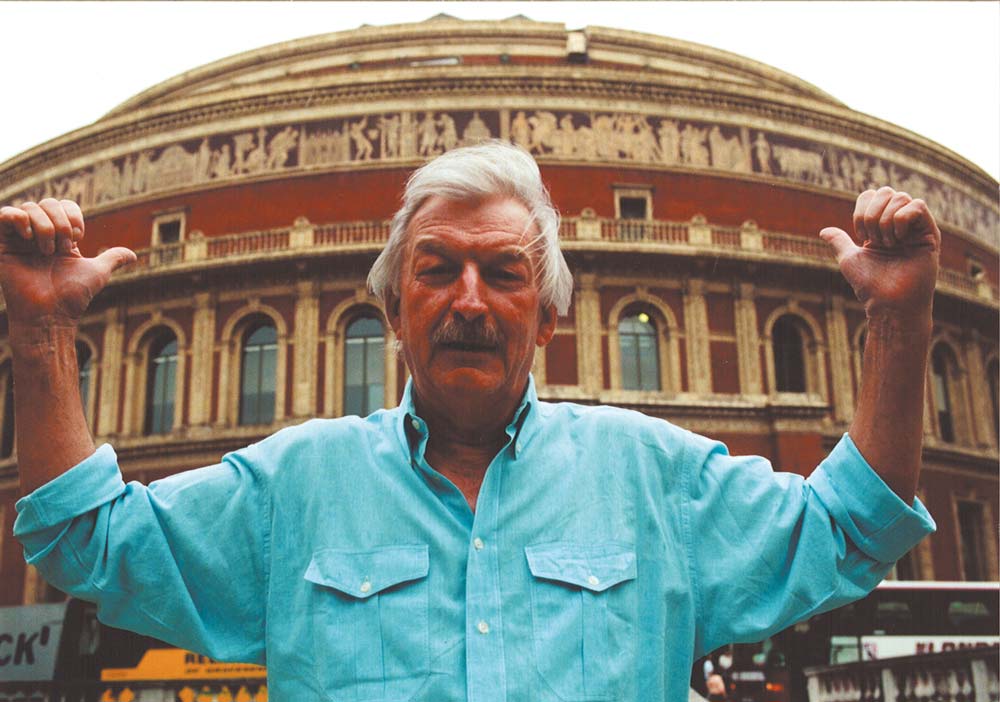 James Last has given numerous tours on all continents. Since his first live tour in 1968 he has given approximately 2,500 concerts.

He had performed 91 (!) concerts in London’s venerable Royal Albert Hall alone! That could just possibly be a record-breaking number because James Last is the only non-British musician who has played this legendary hall so frequently.

“Music is my World” – the great European arena tour of 2011 bore the title of James Last’s personal motto in life. With his 2013 tour entitled ONE MORE TIME, this Grand Seigneur of good cheer once again confirmed how timeless, strong and present he and his music are: 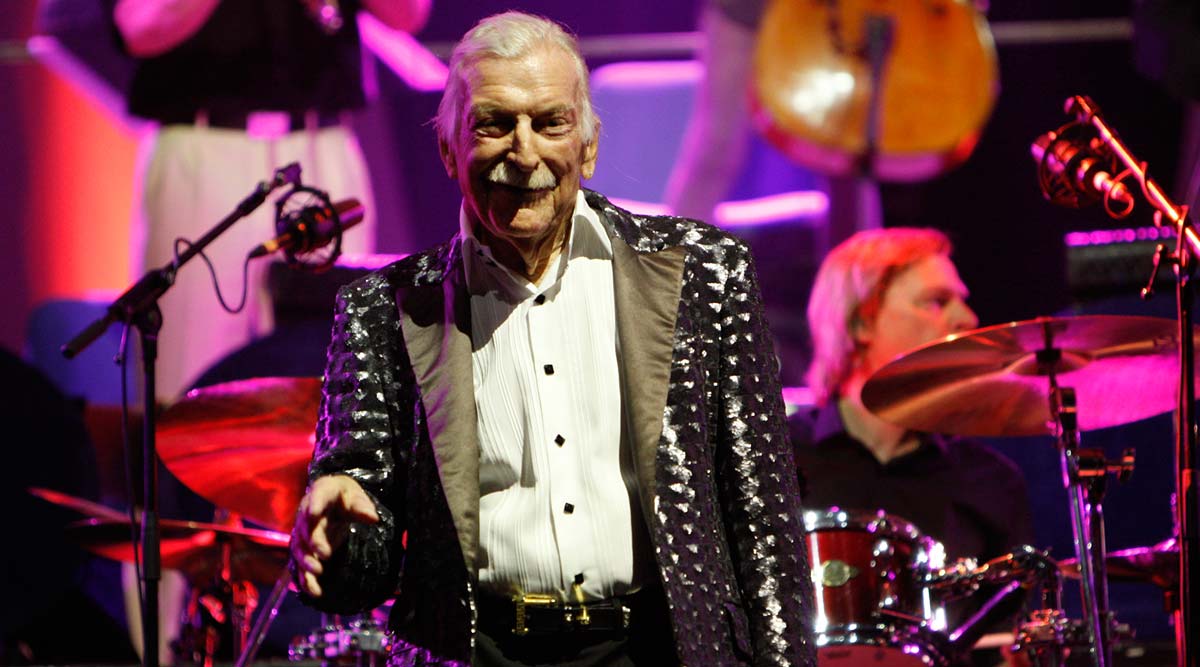 “NON-STOP MUSIC” is the name of this new tour and with it, he is on track to achieving a unique milestone in German music history!

50 years after the release of his first LP „non stop dancing `65“ James Last declares that NON STOP MUSIC will be his final tour.

On june 9th  James Last dies at the age of 86 in Florida peacefully in the circle of his family.

With „NON STOP MUSIC – live in concert 2015“ a unique chapter of German and international music-history was closed for ever. The grandiose concerts became his very personal „good bye“. 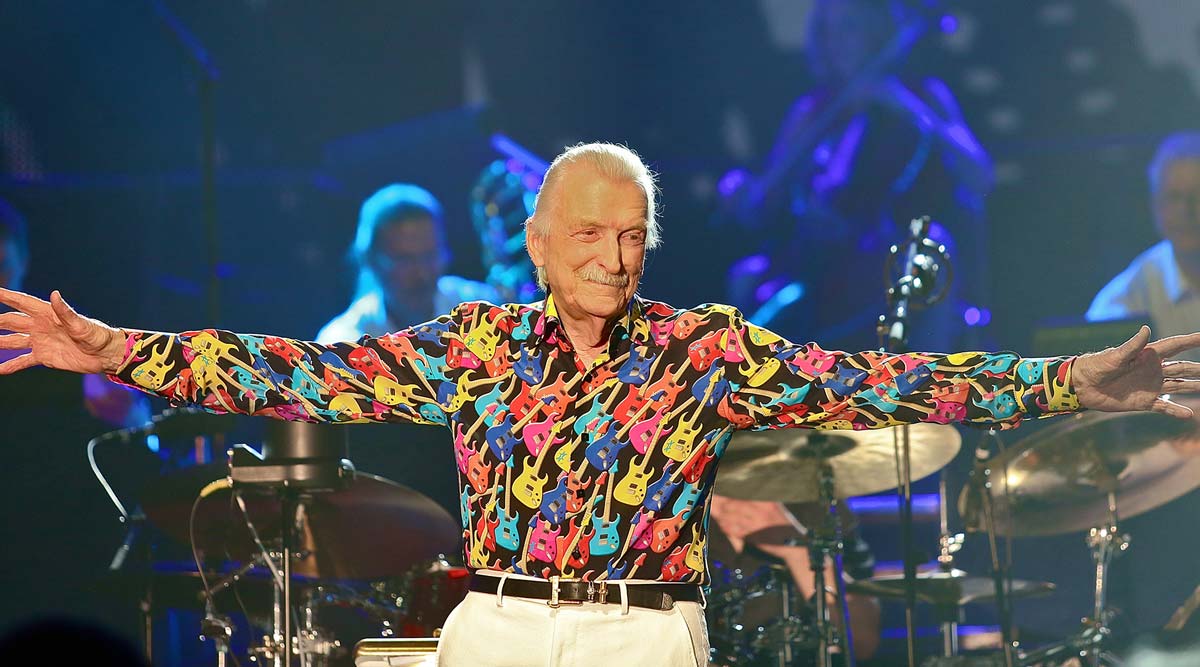 The unique and exceptional artist lived for music. James Last was the most successful German band leader of all times.

In him, the world lost a unique ambassador, whose expressive and all-encompassing language was music. A visionary, who by his impressive strength and openness, his professionalism, modesty and love of life served as a role-model and as an inspiration for many generations worldwide.

He is one of the young people interested in the new sounds of jazz and swing coming over from America. AFN, the US Army’s radio station in Bremerhaven, is their primary source of information.

Together with his two brothers, Robert and Werner, he plays in the newly-founded Radio Bremen Dance Orchestra

The Last / Becker Ensemble is founded

In this and the following 2 years, journalists from Germany’s “Jazzpoll” magazine choose James Last as the year’s best double bass player

Member of the NWDR Dance Orchestra 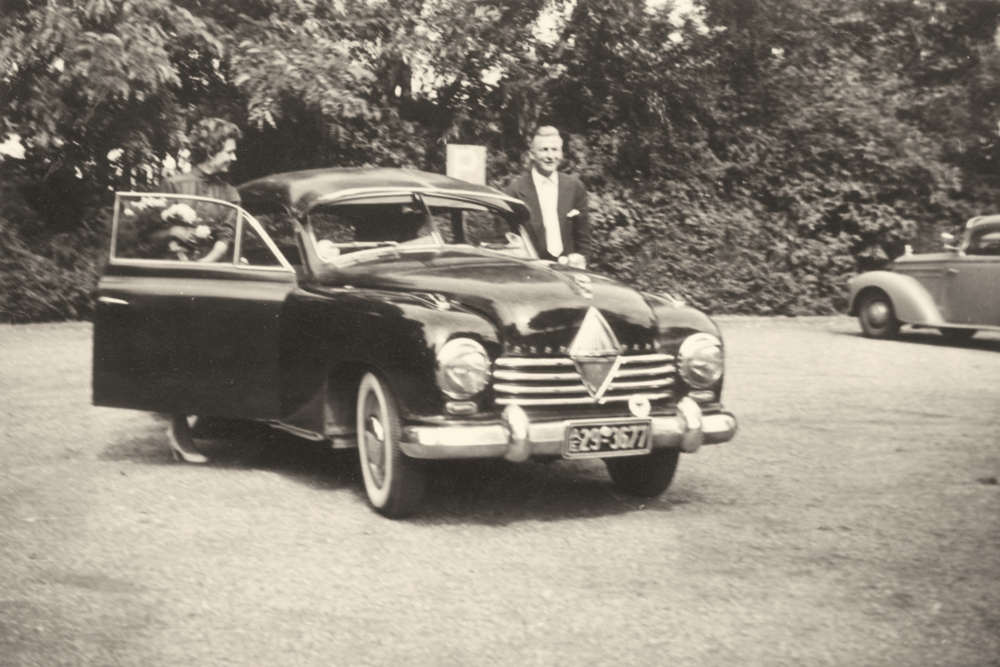 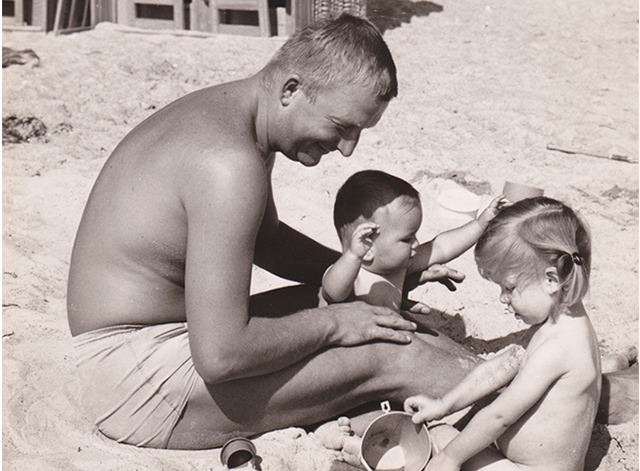 Artist contract with Polydor which is still in effect today; Composes “Games That Lovers Play”

Tours of the Federal Republic of Germany and Denmark; the music magazine “Musikmarkt” names him the most successful instrumental interpreter; voted “Favourite Orchestra” in Germany’s “Musikpoll”

Big tour of Russia, commissioned by the Goethe-Institut

Tour of England and Ireland; “Dance into May” in Dortmund’s Westfalenhalle; tour of Scandinavia, Germany and Austria; “Star Of The Year” awarded by British magazines Music Week and Billboard

Tour of Switzerland, England, Ireland and Holland; concert in Danzig; tour of the German Democratic Republic; concert recording at the “Palace of the Republic”, East Berlin; “Robert Stolz Award 1977” from the Robert Stolz Foundation

Bundesverdienstkreuz am Bande (Order of Merit of the Federal Republic of Germany) presented by Walter Scheel, the President of Western Germany

150th gold record awarded; tour through England and the countries of the Far East; award presented by America’s “Cashbox Magazine” for the best instrumental production of the year in “The Seduction”.

Big tour of Germany and England

Lands a hit single with “Biscaya”; tours through the Benelux, Scandinavia and South Africa

Big tour of England and Ireland

Continuation of the big England/Ireland tour

Last of the legendary James Last costume parties in Hamburg’s Ernst-Merck-Halle; tour of Great Britain, Germany, France and the Benelux

Additional tours in Great Britain, Ireland, Holland and Belgium; concerts in Cottbus, Gera and at the Palace of the Republic in East Berlin, Germany; TV show “Kinder unserer Welt” (Children of our World) in West Berlin

Televised open air event on Bremen’s Rathausplatz on the occasion of his 60th birthday;

five concerts in the “Palace of the Republic”, East Berlin; two concerts in Dresden’s “Semperoper” with René Kollo; Benelux tour

Several TV shows including “Christmas with James Last” (ZDF) with artists such as Milva, Richard Clayderman and Hans Clarin in the Basilica of Ottobeuren in the Allgäu region of Germany; presented with the “Goldene Eins” award

Presented with the “Echo 1994 Life Award” in honour of his life’s work as a German artist; tours of Great Britain, Belgium and Holland; television recording of “Beach Party” in Key Biscayne/Florida

Tour of England and the Benelux, big tour of Germany 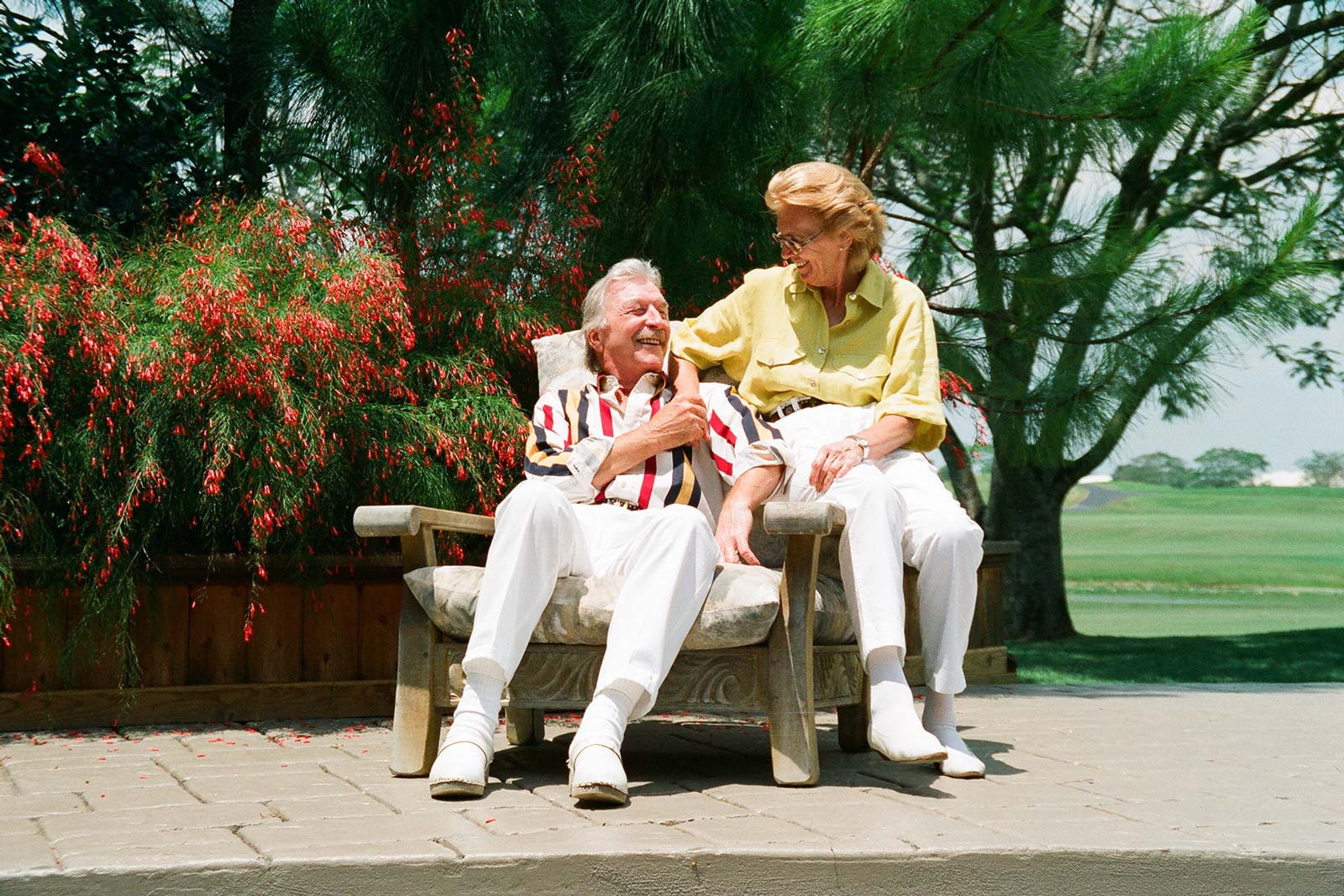 Death of his wife Waltraud

Following a fantastic concert in London’s Royal Albert Hall, James Last celebrates his 70th birthday together with his family, orchestra, numerous Polydor representatives, his management as well as friends and fans

150,000 tickets sold – the most successful tour production of the year. Three new CDs. 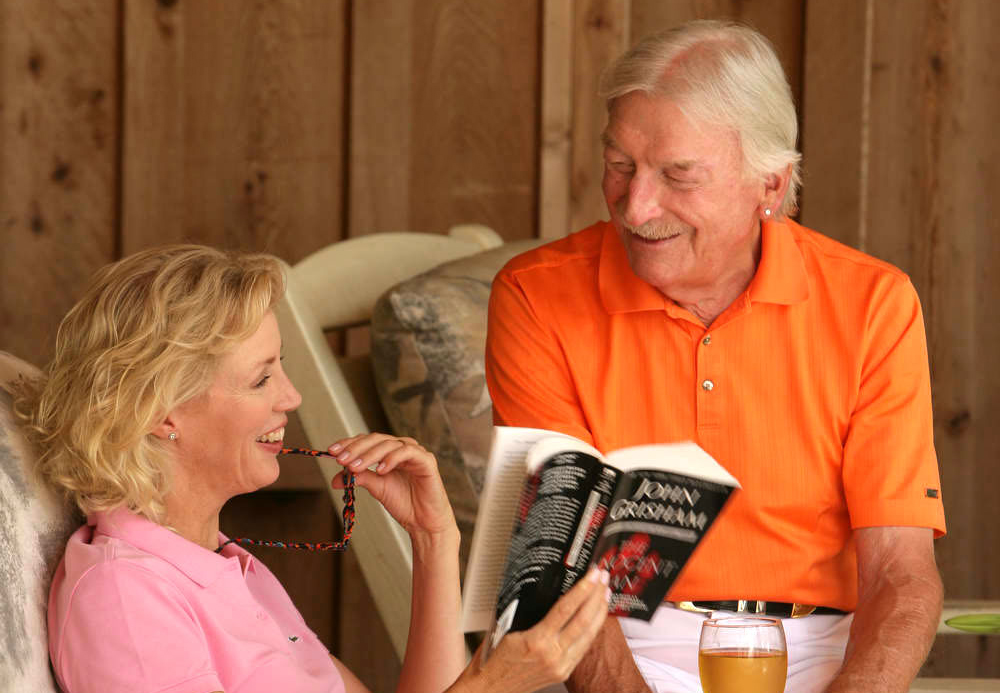 Recognition of his life’s work: on 8 September James Last is awarded the very first “Platin Stimmgabel”.
Production of televised concert recording / DVD “The Gentleman of Music”: The James Last Show is very successfully broadcast on all major TV stations across America.

New albums released: “Ocean Drive”, “ABBA” and “Gentleman of Music” as live CDs, videos and for the first time on DVD

October/November: tour of Great Britain and first concerts in Ireland in 15 years

26-concert arena tour of Germany in April/May;
TV production of “A World of Music” for America’s PBS on video and DVD;
sensational tour of China in September;
Big 28-concert tour of Europe in October/November

James Last celebrates his 75th birthday; spring tour of England, Ireland and Scandinavia in April and May with 17 concerts, 3 of which in London’s Royal Albert Hall;
Big 35-concert arena tour from October to December in Germany, Austria, Switzerland, Belgium, Luxembourg and Holland; anniversary CD entitled “They call me Hansi”

“Around the World at 80 Years” tour, 23 concerts at Europe’s biggest venues (with a focus on Germany)
Awarded the “Senatsmedaille für Kunst und Wissenschaft” (Senate Medal for Art and Science) by the Free Hanseatic City of Bremen;
Appointed “Honorary Senator” by the University of the Arts in Bremen;
Presented with Universal’s “Lifetime Award” for over 80 million sound recordings sold;
Soundtrack for the German comedy “Dinosaurier” (Dinosaurs) (Constantin Film, directed by Leander Haussmann)

“Music Is My World” arena tour in spring 2011, 24 concerts in Germany, England, Austria, Switzerland, Belgium, Holland and Denmark
Arrangement of the christening song “Große Freiheit” (Great Freedom) and performance with Unheilig at the christening of the “Mein Schiff 2” cruise ship for TUI Cruises

Golden Order of Merit for services rendered to the State of Vienna (april 8th)
“The LAST Tour 2013 – ONE MORE TIME”: Big European tour in april/may

Big tour throughout Europe „NON STOP MUSIC – live in concert 2015”:
24 concerts in Germany, Denmark, England, France and Austria ( 2march 22nd – april 26th )
On april 17th James Last is celebrating his 86th birthday together with his family, his musicians and the whole tourproduction-crew on tour.

James Last dies at the age of 86 in Florida peacefully in the circle of his family.
Following his wish James Last is laid to rest in Hamburg Ohlsdorf.